Last month I watched a really well made Dutch documentary called “Ik alleen in de klas” which translates to: I alone in the class(room).  The filmmaker Karin Junger, a white mother to three black children, decided to make a documentary about the struggle that black and mixed race youth are experiencing growing up in the Netherlands. She brings her kids with a group of friends to a French estate where they spend time together. They hold group sessions during which everyone shares one moment, a memory of growing up whilst experiencing everyday racism. After the group has listened to the testimony, they play out the scene to make it more tangible. It’s incredibly powerful that way, especially because racism is not always obvious (even to the person making racist remarks) it can be so subtle…just fun, or a joke..  It’s often dismissed as “I didn’t mean it like that, of course I believe in equality, I was just joking, don’t take it so serious”. Sure, if this would just happen sometimes, but that’s not the case. It’s part of daily life and that’s when ‘just a joke’ becomes serious.

Here is a short clip of the documentary to give you a feel (it’s in Dutch): Crystal tells about a situation which happened at school, the teacher makes a racist joke during class: “..but you know what would be really funny? If I locked an annoying patient up in a small room with a fat nigger..”,  she does not confront him about it, but regrets it afterwards.

Click on this screenshot to go to the full documentary (sorry only in Dutch for now): 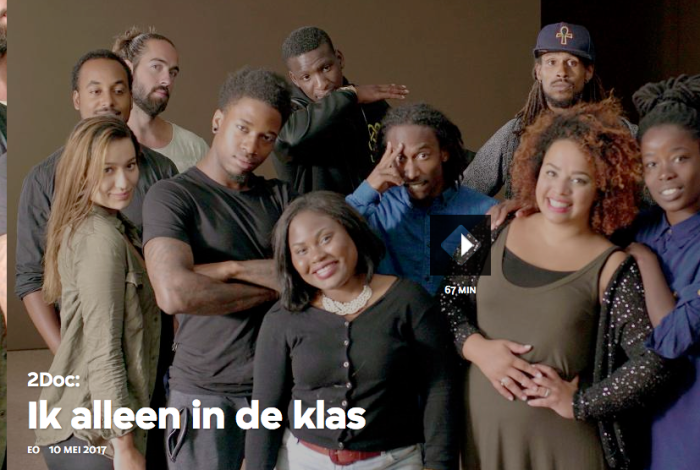 This documentary comes at a time when we (the Netherlands) are struggling to acknowledge the suffering that is caused by racism, which is illustrated well with the discussion about ‘Black Face‘.

I was curious to watch “Ik alleen in de klas” because I am raising mixed race children in the Netherlands too (with Senegalese/Jordanian/German/Dutch roots), and we live in a small town where there is not so much variety. But I was not prepared for how this documentary would actually affect ME… whilst watching them share their memories, sometimes traumatizing sometimes more mundane and innocent looking, I realized I had gone through exactly that… feeling like an outsider, not welcome, not understood ,unjustly judged! It really shook me, because until now I never really understood that it was everyday racism which made me feel so inadequate…

I was raised in Germany and later from the age of 10 in the Netherlands. In Germany we (my sister and I) were part of a very mixed group of children (Polish, Thai, Portuguese), when we moved to the Netherlands I all of a sudden was the odd one out. I didn’t speak the local dialect either…

My mum always told us: you are not different from the rest, you are Dutch, you have a dutch mum and a dutch Passport. The thing is, my sister has white skin and I don’t. My dad did not share the Jordanian culture with us at all, thinking it would be best to give us a western upbringing.

So there I was, not able to connect with my Arab roots, being told I’m basically not brown, because skin tone doesn’t matter. ” Ignore those silly remarks people make..” But the first conversation was always about my skin colour:  “where are you from”. People always looked surprised and maybe disappointed that I wasn’t that exotic after all… I could never fit in anywhere, feeling like a fraud..sorry I look Arab but I’m not..and sorry I don’t look Dutch, but I am.. culturally. I explored lots of different looks and styles, religions etc. Now realizing I was just desperately searching for a tribe, somewhere to belong.

Yes it’s true. Struggle makes you a richer person. So, yes I am grateful to have these insights and experiences now. I’m not trying to take that away from my children, but I want to equip them with tools to deal with growing up in a white world. I want them to feel adequate and not let the ignorance of others make them bitter.

(below a little peak into the drawing process)

And last but not least

Thank you for taking the time to visit my blog/ website. Please leave your thoughts, questions, ideas below. I love hearing from you.

Registered business in the Netherlands